Ataru Hori is a major character in the Mr. Driller series, making his first debut in Mr. Driller G.

Ataru is Japanese with gray hair that covers his right eye. He has brown eyes and he's never seen wearing anything other than his driller outfit. He wears a black helmet with spike-shaped earpieces. His suit is a dark blue color with light blue sleeves and a white cross on his chest. He also wears a red scarf. He is sometimes seen with a twig in his mouth.

Ataru is Susumu Hori's older brother, and Taizo Hori and Toby Masuyo's eldest son who ran away from home. He is a rogue driller who lacks an official driller's license. He lives in an area unknown to any of the main characters in the series, thanks to a confrontation with his father, whom Ataru also holds a grudge against. He is a loner-type who usually attempts to look 'cool', and has a companion named Usagi. He considers his younger brother, Susumu, to be a "sweet kid." He is voiced by Toshio Furukawa, who also provides the voice of Taizo Hori.

Ataru's max top speed is much higher than the other drillers, surpassed only by Keel Sark. Due to his high speed, he has a higher air consumption rate, making him best suited for advanced players only. 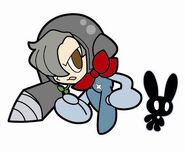 In Drill Land and Drill Spirits

In A
Add a photo to this gallery

Retrieved from "https://mrdriller.fandom.com/wiki/Ataru_Hori?oldid=6164"
Community content is available under CC-BY-SA unless otherwise noted.